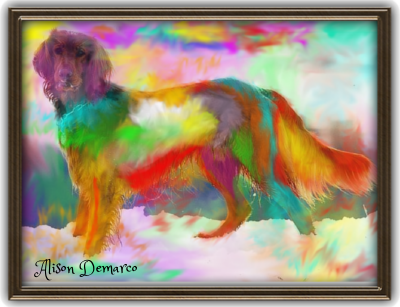 Aura Drawing And Reading
To Purchase Click This Graphic £67.33 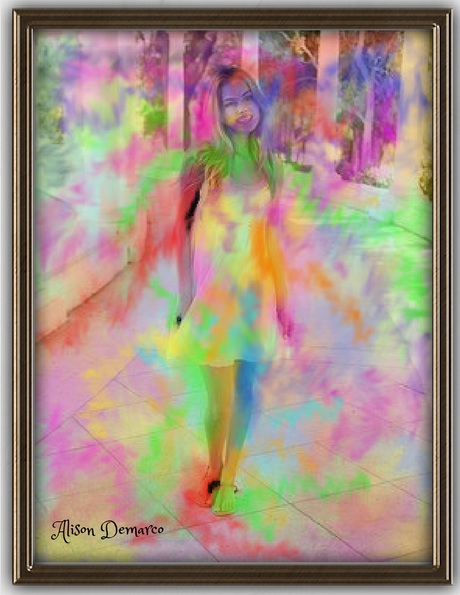 FIND OUT WHAT INFORMATION IS HELD WITHIN YOUR AURA AND HOW YOU CAN USE THIS TO CREATE THE LIFE OF YOUR DREAMS.
AURA “SEER”
Alison sees, analysis and draws the pure consciousness, the core essence, physical, spiritual and emotional layers
residing within the energy fields (aura) of each and every living thing.

You will receive a physical hand drawing suitable for framing
as well as a computer generated file for sharing across the internet.

NOW YOU CAN SEE, HEAR AND UNDERSTAND WHAT YOUR AURA COLOURS HAVE TO SAY ABOUT YOU.

Seen through her eyes, Alison Demarco’s portrayal of her subjects living energy fields (aura),
will reveal the subtle information held there.

The Real Story
In 1994 my Irish Setter, Aurora became lame.
The vet took X-rays and did various tests, but could give no explanation of why she was lame.
Told to get a good insurance for this one year old puppy, I felt at a loss as to what to do next.

One night, Aurora was lying at my feet and my friend John had his easel and paints in the lounge. I had been watching him paint and found myself wanting to paint too, the desire getting stronger and stronger, until I could resist no longer.
Intrigued, John watched me as I began to paint.

The painting seemed rather erratic, a dab of colour here, a dab of colour there.
I even turned the paper round several times. With a final dab of murky yellow in the middle of the picture, it was finished.
I looked at it and thought ‘What a mess’, and slammed the picture down, disappointed with my efforts.
Just as I was about to throw it in the fire, John stopped me.
He asked, “Do you know what you have drawn?”

But he said, “No, you have drawn Aurora in her aura colours.
Have a look.
To me, that splodge of pink coming out from her back is her energy escaping from a gap in her aura.
Her problem is not in her legs, it’s in her back.”

I looked at the painting and now saw what John was describing: here was a perfect picture of Aurora, curled up in a ball, sleeping.
I was very excited. How could I have done this?
But more importantly, I suddenly realised that I may have the key as to why she was lame.

The next morning, I called John Macmanaway, a healer in Fife, and made an appointment for Aurora.
John uses massage and manipulation to treat people with back problems, as well as working with animals.

At the appointment, I didn’t tell John anything about my aura drawing,
or that Aurora could not move faster than a walking pace without becoming lame.
John began by dowsing over Aurora’s body and within minutes,
he found a trapped nerve in her back at the exact location of the pink/reddish splash of colour in my drawing.
He released the trapped nerve using manipulation, and she was better straight away.

N.B. It is illegal to treat or diagnose any animal unless you are a qualified veterinarian.

Ready to Make a Change?