The Story Behind The Signature From Tibet Part 9 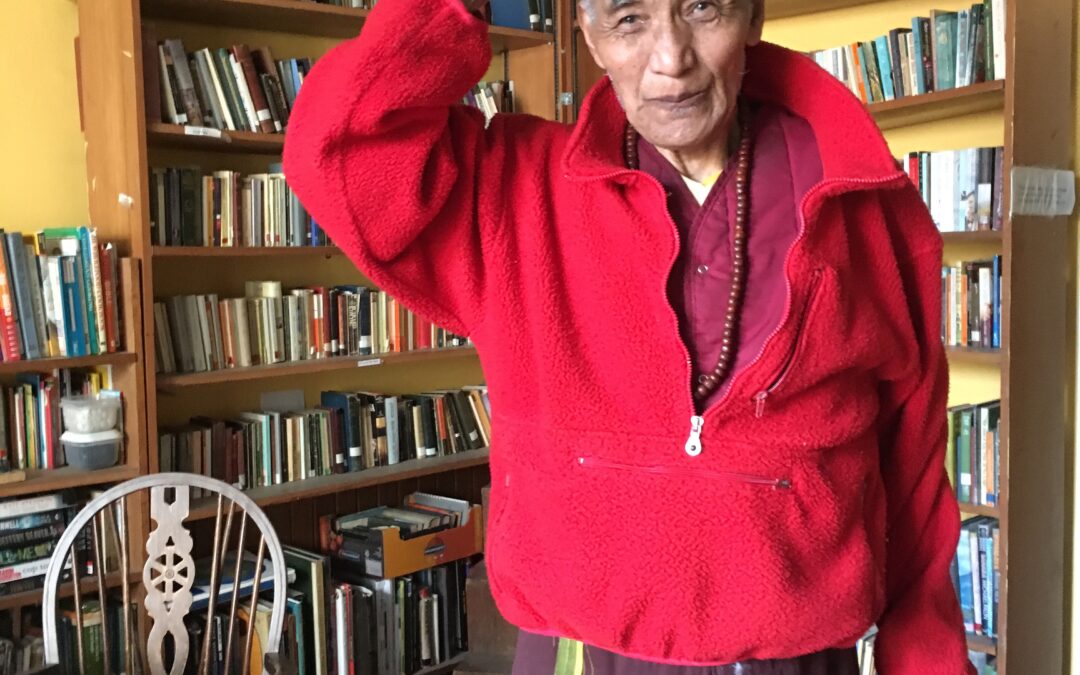 PART 9 THE STORY BEHIND THE SIGNATURE FROM TIBET

As the now-familiar golden dome of the temple began to rise above the evergreen spruce trees, my heart inadvertently skips a beat.  What was it that triggered the feelings of happiness within me every time I approached Samye Ling?  What was it that immediately rendered my body, mind and soul into a relaxed state?  What was it that caused me to feel such incredible peace here at Samye Ling?  What was this energy that engulfed me and how did it naturally raise my vibration to such a level of bliss the moment I arrived within the confines of this extraordinary Buddhist Centre?

I was relieved that this time our journey to Samye Ling, did not involve a kamikaze crow flying into our window screen as it had on our first trip. As Joan turned the car into the wide driveway of Samye Ling, my eyes were drawn to the colourful flags attached to the top of long white poles.  These flags were billowing rheumatically in the gentle breeze, their vibrations sent out a welcoming message to my senses.  I belonged here, everything I had ever needed was here, right here, held within the boundaries of Samye Ling.  Today was the day I would show the Rinpoche my plans for my healing centre, as he had requested. I realised that I was suddenly excited. I now felt that butterfly feeling in my stomach.  I tried to analyse these feelings, dampen them down and bring my energy back down to earth. I justified to myself, that the Rinpoche was a kind, caring man and that I had no reason to be nervous about seeing him.  After all, it was, He, the Rinpoche who had requested me to write out my plans, to which he would oversee and guide me.  Yet. I still felt the same nervous energy no matter how I tried to quantify my feelings and still I could not fathom out why I placed so much importance on this meeting?  One question that kept coming into my mind was. why he had offered to be my overseer and why he granted me a Dharma Centre.  I knew little to nothing about Buddhism and was not a Buddhist, yet here I was bang in the middle of a way of life that filled me with excitement, happiness, peace and wonderment.

Having parked the car, we began to walk towards the Coffee Shop. “Hey Joan, I hope our favourite monk is in the cafe, he’s really interesting and good fun.”  “Yes, that he is, of course, he may be working in the organic garden, but we will find him, Alison, that’s for sure.

As luck would have it our friendly monk was resting after a morning working outdoors in the garden.  Rising from his seat as we entered the café, he welcomed us and gestured for us to join him at his table.  “Coffee for two is it ladies” enquired a voice from behind the counter.  “No, herbal for me please” replied Joan.  “Defiantly strong black coffee for me” I added.

Sipping hot steaming coffee from large brown mugs, I asked our friendly monk about the history of Samye Ling and how the Rinpoche had come across this beautiful remote location.

“Well, Alison, Akong Tulku Rinpoche was born in Eastern Tibet and is the reincarnation of the 1st Akong Rinpoche, who was the Abbot of Dolma Lhakang monastery in the Chamdo area. His Holiness the 16th Karmapa sent out a search party with clear instruction as to where to find the reincarnation of the first Akong who had recently passed over.  When the search party arrived in the village, they looked for a boy who matched the description given by His Holiness the 16th Karmapa and found a match. This was a four-year-old boy, who is as we know him now, Akong Rinpoche. Anyway, the boy was taken to Dolma Lhakang where he was educated in the Kagyu lineage of Buddhist teachings and Tibetan medicine. Akong was given teachings by His Holiness the 16th Karmapa.  When he was twenty years old, Akong and a party of 300 others fled to India. It was a horrendous journey, due in part to the harsh nature of the terrain, the freezing temperatures and the fear of being found by the Chinese.  As it was only thirteen people survived the journey, one of which was Akong.  His mind training served him well.

On his arrival in India, he spent time in refugee camps.  Finally, a sponsor paid for him to go to Oxford to learn English.  He did not have a bursary so he worked as a hospital orderly in the Radcliffe Infirmary to earn money. It was in 1967 that Akong with Trungpa Rinpoche co-founded Samye Ling. Trungpa is no longer here, he left.  As you see Samye Ling is flourishing.  Akong works beside us building and creating, he is truly a remarkable man.  When His Holiness the 16th Karmapa who was Akong’s teacher as well as overseer to the building of Samye Ling, passed over, Akong was one of the people responsible for finding and recognising His reincarnation.  This was a monumental journey which had so many different twists and turns you would be amazed.  However, Akong did find and recognise the boy who became His Holiness the 17th Karmapa.

“Oh, do you have to go, I want to hear more, who is this Karmapa you are talking about, I’m intrigued” I interrupted. I was drawn in into these interesting renditions from our friendly monk, they captured my imagination and took me to a place where I felt at home.  It felt as if I had always been part of this whole experience.  I felt as if I was outside looking in and at the same time inside looking out.  There was a magical quality an overwhelming sense of oneness, unexplainable, yet blissful.

“I love to stay and chat but no Alison I do have to get on, there is of course so much more to tell but I have to get back to my garden, the vegetables are calling, but I can’t wait to hear what the Rinpoche says about your plans. Coffee later, I think.  With that, he pushed his chair back from the table, smiled and waved goodbye.